Some tips on how to cook food

Nutrition is an aspect of our life that contains many choices: what do I want to eat, where do I buy food, what products do I buy, how do I choose it?

Even if this aspect is often underestimated, the cooking of a food , the method of preparation or conservation affects its nutritional properties. What we expect in terms of nutrition, could be nullified by a simple misjudgment accentuated perhaps by distraction or lack of time.

Cooking was created to make food easier to eat and digest i. Let’s think of a caveman grappling with a piece of meat from some animal he had just killed: it was certainly not a tartare, cooking with fire must have made a big difference in its ease of use.

At the time, however, they only had a live fire, as civilization has developed, we have invented many new ways to treat food, up to today with a series of methods that are distinct by food category , efficacy and usefulness for health.

At the medical-health level, not only cooking counts, but also the preservation before cooking.

Depending on the cooking method, a series of physical and chemical transformations can take place which include denaturation of proteins, dispersion or concentration of nutrients.

A very important reaction not only for those involved in chemistry but also in the kitchen is the Maillard reaction, discovered by the French chemist Louis Camille Maillard in 1912.

Maillard studied the browning of foods subjected to heat, wondering why they took on the typical brown appearance, flavor and aroma of “cooked” and observed that the responsible components were sugars and proteins that bind to each other at temperatures between 140 ° C and 180 ° C.

It is responsible, for example, for the formation of the crust of bread, the browning of fried foods, the color of roasted coffee and cocoa, the color of the beer and the much-loved crust of the steak.

The problem is that the Maillard reaction is responsible for many other potentially harmful compounds including: acrylamide, heterocyclic amines, furan, 3-monochloropropane-1,2-diol (3-MCPD) and each of these compounds pose a danger to your body even at low concentrations.

Furthermore, high temperatures tend to degrade the foods you cook, especially fats: they too tend to form compounds that are harmful to our digestion.

It is immediately clear that the best thing would be to always work at cooking temperatures closer to 140 ° C rather than 180 ° C, indeed trying to keep as low as possible.

If you take daily processed and cooked foods (packaged or self-produced) from breakfast and so on for all other meals, you can well understand how many and what are the occasions when you risk to introduce excessive doses of such harmful substances.

Some characteristics of cooking methods

There are many cooking methods and technology continues to develop to make it possible for us to be ever more efficient, both in the use of energy resources and in the preservation of the precious nutrients present in food.

Some are avant-garde, such as the thermostabilization used for the Bonus Food of European astronauts, but also limiting ourselves to what can be used in our kitchens we have a wide choice, although each method can have pros and cons, let’s see which ones.

It allows you to not add fat , but on the other hand it disperses the micronutrients, especially the water-soluble vitamins such as vitamin C and the B vitamins, which are dissolve in water together with mineral salts.

The ideal would be to use a little water, or to reuse the cooking water where possible, for broths in the case of vegetables or for cooking vegetables if you have cooked cereals or legumes in water ( previous soaking instead should be thrown away because it contains antinutrients).

Ideal for grains such as rice, millet, quinoa, spelled, amaranth, cous cous , it allows you to waste less water and less energy because the final absorption can take place without the use of the stove.

Cooking in a pan

It lends itself very well to quick and appetizing preparations, but you must be careful to use stone or non-stick pans , with a thick bottom so as not to raise the temperature too much and think carefully if it is the case of adding fats that would be degraded quickly.

A separate discussion for frying , type of cooking to be limited: extra virgin olive oil is better ( even if the economic cost may not be indifferent ) or peanut oil.

It can take place in a little liquid such as water, but also in lemon or wine: it cooks at lower temperatures and in a sweeter way, and can also be used to flavor foods differently.

But with prolonged cooking, you can also use lower temperatures .

Keeps the nutrients intact and does not require the addition of any other ingredient or fat: an idea is to use multiple layers to cook many things at the same time so that the foods cooked in the higher levels acquire the aromas of those below.

Get rid of the perception that it is a “sad” type of cooking, because steamed foods are suitable for many recipes .

Cooking in the microwave oven

It takes advantage of the water present in food, heating it and thus cooking the food.

Many people are reluctant to use the microwave for anything other than simply reheating previously cooked food: if you want to try the advice is to prefer cooking vegetables or cereals .

It is very difficult in fact to verify which temperature the instrument reaches, it may not be sufficient to eliminate the microbiological risk in products such as fish or meat , in addition to the fact that cooking may not be uniform due to the different distribution of water in the food.

The preservation of vacuum packed foods

It requires the use of other tools such as bags or jars for vacuum packing but retains every nutrient, aroma or condiment in the bag.

Cooking with the pressure cooker

The “cons” is the greater attention that must be paid to check the degree of cooking of foods, but the time savings for long preparations such as soups and legumes are evident.

By low temperature I mean between 50 and 65 ° C: it is ideal for maintaining the micronutrients and the flavor of the preparations. It can be performed with a special machine that constantly signals the temperature or even in ovens that keep the cooking temperature constant.

It consists in the immersion of cooked or raw food cut into thin slices, for a variable time, in a liquid typically composed of acids (vinegar, lemon juice, wine, beer) , oil and aromas such as spices and herbs.

In the case of meat, the muscle fibers soften and become more digestible.

Pay attention to smoking : it is not a type of cooking, the food remains raw.

Healthy cooking methods: what are the principles and tools to use

To avoid having all the negative reactions from cooking there are some tips you can try to follow:

If you are among those people who are forced to eat often in restaurants or in public places, especially for work, pay attention even in those moments when you are away from home and try to understand how they are processed food .

In fact, in your home you can work on your personal education in correct domestic cooking, but very often it is difficult to know what happens in public catering kitchens and above all it is not known at what level awareness and attention with respect to these issues.

The cooking method is just one of the valuable factors to consider to protect your health.

Have you tried all the cooking methods described in this article or is there something you haven’t tried yet?

If you want to further increase your level of food awareness I can suggest you take a look at my “Potential Nutrition” course, which will give you access to numerous other tools to work on improving your health. 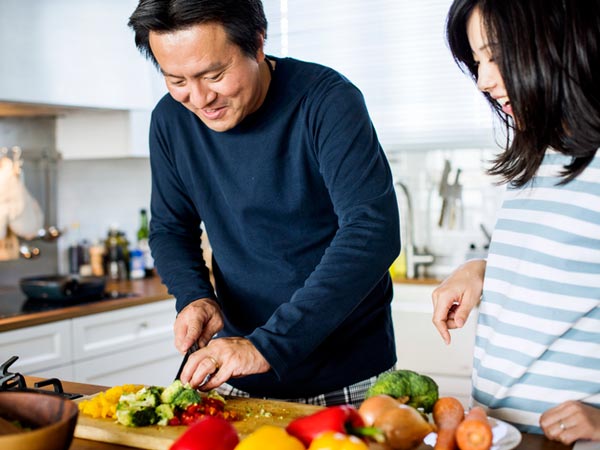